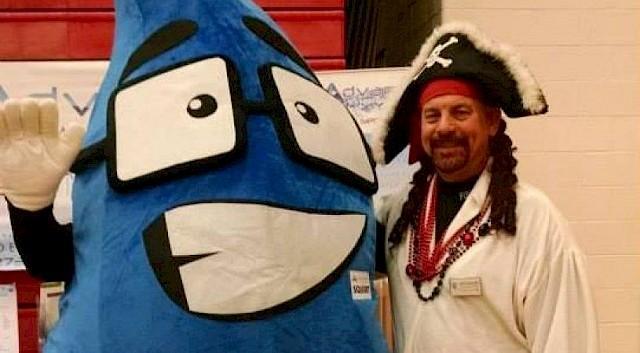 Squirt is our official company mascot! He can be seen at many local events in Livingston, Oakland, and Genesee County. Kids and adults both seem to really get a kick out of him, so he will be appearing at many upcoming trade shows, parades, etc. A lot of these events cater mostly to adults. It is important to us that we are able to provide entertainment for the children in attendance, all while offering good, sound education about water treatment to their parents.

His official debut was back in October at the Novi Home Remodeler’s Show at the Suburban Collection Showplace. We realized very quickly that taking him to all future events would be a must!

The next event that we took him to was another event at the Suburban Collection Showplace in January…the Novi Home Improvement Show. Again, adults and kids alike were eager to ask questions about the giant water drop, as well as snap a ton of great photos with him.

Another local event that Squirt appeared at was the 2015 Pinckney Business Expo, which benefited the Pinckney Instrumental Music Program. The day was filled with music played by Pinckney students. A spaghetti dinner was offered to all who attended as well. Squirt was a hit once again with all of the kids. He even ran into a few fellow mascots…Rick Beaudin, aka The Pinckney Pirate and Ricky RE/MAX.

We took part in the 2015 Fenton Community Expo this past weekend. The event was held at the Fenton High School and yielded a great turnout. Folks from Genesee County and many surrounding areas came to watch the entertainment that was provided continuously through the show. People were also able to talk to many local vendors about a multitude of different services. Squirt spent most of his time in the Kid’s Zone taking pictures and hanging out with other mascots In the meantime, we all kept busy at our booth talking with people from many cities, including Fenton, Linden, Holly, Hartland, Clio, and Grand Blanc…just to name a few.

Squirt also has his own Facebook page. Like it so that you can keep up on where he will be next!