Rumble From The Basement 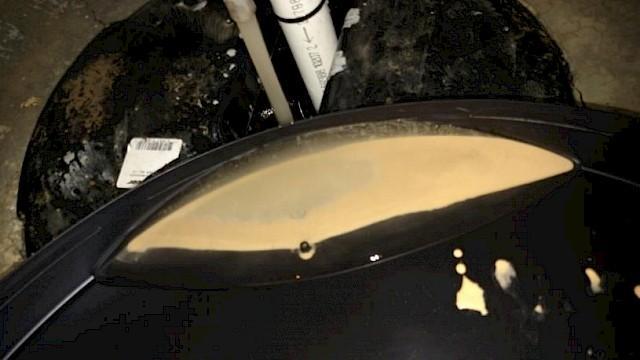 I was at a home on Friday in Hartland, MI installing a water softener for a new customer. Her condo was 12 years old and in Hartland city water. A water treatment system had never been put in place up until then.

Upon my arrival, I could hear a loud rumbling sound coming from the basement. The sound was coming from the hot water heater, which was the one that came with the home 12 years ago. The rumbling was so loud that it sounded as if the hot water heater was ready to explode at any moment. When I asked the homeowner if this has bothered her she mentioned that she could hear it quite prominently in her bedroom all night long. I took a minute to show her what the problem was and provide a solution.

What happens is, over time, tons of sediment sinks to the bottom of your tank where the heating element is. Water gets mixed in and trapped underneath the sediment (mostly calcium). As your water heater’s burner heats that water, it creates steam bubbles that are violently escaping the sediment layers.

After installing the water softener and the new, larger drain valve, we flushed the heater for 45 minutes. Muddy water continued to drain out of it. We ran 500 gallons of water through her new water softener to flush the water heater out and were still getting discolored calcium sediment-water out of the bottom of it.

The lesson of the story is, just because water heaters don’t look bad, does not mean that there isn’t a problem. Calcium and rust can build up in the bottom of the water heater over time. A water softener that isn’t working properly, or the lack of one when necessary, could cost you hundreds of dollars in additional repairs. If you hear your water heater making a loud, rumbling noise it is safe to say that it needs some maintenance work performed. You will most likely find that the noise is due to calcium and/or rust build-up caused by the lack of a proper water treatment system.

In this instance, the rumble from the water softener had dissipated by the time we left the condo. The homeowner was left with clean, softened, non-chlorinated water coming from the EVRC city water softener that we installed. In addition, we were able to the issue with the water heater, saving our new customer any additional unexpected expense to repair or replace it.

Realistically, the noise is not what you should be worried about (as scary as it sounds).
Since that sediment acts as a layer of insulation, your water heater’s burner is running
longer. This will cause the following:

Needless to say, you do not want to deal with that kind of disaster. According to disastersafety.org, “Water heater failures cost an average of $4,444 per incident after the deductible was paid.”

Think of sediment like plaque on your teeth. If the plaque is left alone, it will deteriorate your teeth. Similarly, the sediment causes your tank to deteriorate. So what should you do to get rid of the sediment? Well, just like your teeth, you should have consistent, preventative performed on your water heater. It should be drained and flushed every 6-12 months to ensure optimum efficiency and performance.

Cheers to better water, and a better quality of life!